What is NFC Tag?

What is NFC?NFC stands for Near Field Communication. Like Bluetooth and WiFi, it's a wireless radio communications standard. In the wireless world, NFC's closest relative — really its parent — is actually RFID (radio frequency identification). Retailers and parcel shipping companies in particular love RFID as a way to keep tabs on inventory supplies and shipments. You may also have an RFID-enabled identification badge that you tap when you get to work or probably have used to access the door of a Hotel Room.NFC works like RFID, but only for up-close-and-personal use. Whereas RFID can be used from a distance, NFC readers work at a maximum range of about 4 inches (10 centimeters). NFC readers aren't suitable for RFID-style inventory tracking; their range is too short. So NFC tags are used for other applications where the ability to quickly exchange a few bits of digitized information comes in handy.How NFC Tags WorkYou can call them smart tags, info tags, or, in this case, NFC tags, but their basic architecture is similar to RFID tags. They both have a bit of storage memory, along with a radio chip attached to an antenna.The only real difference is that NFC tags are formatted to be used with NFC systems. And they're small enough and cheap enough to integrate into all sorts of products: posters promoting circus tour dates, ski lift passes, stickers, business cards, prescription bottles, and even ruggedized labels meant for outdoor use.What are NFC Tags used for?NFC tags are used in applications where the quick exchange of a few bits of digitized information comes in handy. One of the more commonly known ways they're used are in smartphones to make mobile payments; NFC tags are the reason some phones can simply be tapped to a reader to pay for something. When it comes to potential uses for NFC tags, there really are no limits.With RFID-NFC, each tagged item has its own DNA, in the form of a unique ID number securely embedded inside. Tagged items can be identified at any time, and can digitally verify that they’re genuine, so it’s easy to tell what’s legitimate and what’s not. That makes it much harder for counterfeiters to present copies as genuine items. What’s more, with NFC-enabled tags, a simple tap with an NFC smartphone is all it takes to verify authenticity, so everyone – even consumers – can join the fight against fakes.Another important use of NFC chips/tags is in the space of Counterfeiting. Each NFC chip has a unique international identifier which is impossible to duplicate. A manufacturer or a brand that buys NFC chips will be the single and exclusive owner of those chips’ numbers. Besides its unique identification number, the NFC chip also contains a memory zone that can be encrypted with, products traceability, brand's website, and product information. With their NFC-equipped smartphone, the customer can read the content of the chip memory to validate the product authenticity.How does RtistiQ use NFC Tags for Art authentication? 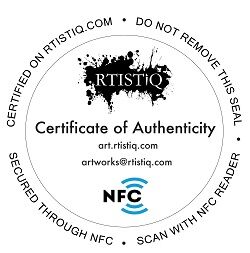 Art has always been subjected to fakes and wrong attribution. With its decentralized nature, lack of public Art registry, and heavy reliance on paper-based authentication certificates, it poses an immense challenge for Art authenticators to validate the originality of the work. With recent advancements in technology and digital adoption, NFC-based physical art tagging combined with a blockchain-powered Art registry has provided the right ammunition for the Artists to attribute their works and use the digital provenance for future royalty claims.RtistiQ offers Artists to attach a tamper-evident NFC tag to their artwork and encode the artwork details into the chip with a simple scan using their mobile phones. The chips/tags are uniquely encrypted for authenticity and can be scanned using any NFC enabled mobile phones to validate the artwork origination. In effect the NFC tag acts as an electronical certificate of Authenticity.Every Artwork attached with a NFC chip, will have a prominent tag for the artwork as below image

NFC security features include but are not limited to the belowTamper-evident casting, once detached cannot be re-usedTemprature, Moisture and Chemical ResistantMessage authentication based on AES-128 encryptionCheck the originality of products by simply tapping with a smartphone or NFC tagRead / Write using RtistiQ App available for IOS and Andriod enabled with NFCThe following article shows how to use RtistiQ App for NFC tagging your Artwork.NFC Tagging your artwork (use RtistiQ mobile app)

Was this article helpful?